The graceful beauty of that offense, particularly after Kevin Durant joined the fray, made it easy to overlook the rugged, disciplined effort taking place on the other end of the floor. During the Warriors’ three title runs in 2015, 2017 and 2018, their postseason rankings in defensive efficiency were first, second and first, respectively. The two times they didn’t win the championship during their stretch of five straight NBA Finals appearances, they finished the playoffs seventh and 11th defensively.

With that corporate knowledge safely secured in their collective hippocampus, it’s easy to see why defense has remained the top priority for the Warriors, who own the NBA’s stingiest defensive rating during their 7-1 start to the 2021-22 season. Green said that Warriors defensive coordinator Mike Brown “challenged everyone” to be accountable defensively, and so far — it’s working.

“What they have in their favor is, they’ve had success when they’ve defended. They have that in their history and their experience. Steph understands that. Draymond understands that,” said Charlotte Hornets coach James Borrego, whose team recently suffered a 114-92 loss to Golden State. “When you have your two best players leading the charge on the defensive end, there’s got to be buy-in, and they understand that. They’re a smart group. It’s probably pushing the younger guys to defend at a higher level much quicker than they expected, and I think that’s important.”

The Warriors’ defensive success has carried over from last season, when they finished fifth in the league in defensive rating and first over the final 20 games. But there were still questions on that end of the floor due to new additions to the roster. They lost two versatile wing defenders in Kent Bazemore and Kelly Oubre Jr., replacing them with Nemanja Bjelica and Otto Porter Jr., not exactly known for their defensive prowess or mobility at this stage of their careers. The acquisitions have also led to defense-first forward Juan Toscano-Anderson, who played nearly 28 minutes per game during that 20-game stretch to end last season, having his playing time cut in half.

Those questions have been answered early, however, as Golden State appears even more connected and diligent defensively. As with so many things involving the Warriors over the past several seasons, it all starts with Draymond Green.

“It’s everything. It’s identity. It’s the versatility of being able to, obviously, guard a lot of different positions,” Curry said of Green’s defensive impact. “It’s showing up in terms of our efficiency every single night, giving teams difficulty just finding looks. His presence and his IQ just always shows up.”

Green sets the tone, but the players around him have to buy in. That’s where the experience and attitude of the veterans really come into play. The return of Andre Iguodala brings a defensive IQ on par with Green’s — or at least close to it. Kevon Looney has been a reliable staple in the middle of the Warriors defense for years. Andrew Wiggins, derided for his lack of effort on the defensive end for the early part of his career, has flourished as the primary defender of the opponent’s best wing scorer on a nightly basis. You can’t sleep on Curry, either, who Warriors coach Steve Kerr continually identifies as underrated defensively.

“I think Steph’s been great defensively. People are sort of quick to just say he’s not a good defender without actually watching the tape,” Kerr said. “Steph’s a really good defender.”

And then, of course, there’s the latest toast of the Bay Area — Gary Payton II — whose defensive highlights have been as jaw-dropping as his poster dunks.

“[Draymond’s] got some dogs with him now,” Curry said. “GP [Gary Payton II] coming off the bench, Loon doing his job, Wiggs on the ball. So, just trying to create that identity and that expectation we can do that every night, no matter who we play.”

Payton, whose basketball resume reads like the itinerary for the world’s dullest vacation — with stops in Rio Grande, Oshkosh, El Segundo and Mississauga — plowed his way into Steve Kerr’s rotation by sheer force, frustrating and disrupting opposing guards into submission. Initially, Kerr would insert Payton to bolster the defense at the end of quarters, but a funny thing happened. Payton kept stealing the ball, not dissimilar to his father and namesake.

“Defensively, he’s been incredible. He’s all over the floor,” Green said of the younger Payton. “When you’ve got a guy pressuring you 94 feet, even if they don’t take the ball, it’s tiring. It weighs on you. … I think he has a tremendous skill set on that side. He has great speed, and can keep up with guys. He has good strength, and is not getting bullied. And he has incredible hands.”

Even if not every Warrior is a defensive specialist, the scheme, effort and IQ have more than made up for it. Bjelica, probably the worst on-paper defender in the Warriors rotation, has even taken a sheen to the other side of the ball thanks to a little help from his teammates.

“I’m happy that my defense is getting better,” Bjelica said. “To play with Draymond and Andre — those guys, they’re just helping you. I look better on the court with them.”

The numbers back up Bjelica’s gracious sentiment, as lineups featuring him, Green and Iguodala have allowed a laughably frugal 66.7 points per 100 possessions in 18 minutes so far this season.

While the Warriors may have anticipated having a strong defense after last season’s success, there’s a potential area of concern that’s been a pleasant surprise. Golden State plays small ball for a considerable portion of games, with either Green, Bjelica or Toscano-Anderson at center, so rebounding could be a serious issue. But so far, it’s been quite the opposite. The Warriors are second in the NBA in defensive rebounding percentage despite not having a single player average more than 8.8 per game (Green). It just goes to show that rebounding isn’t necessarily about size or leaping ability — it’s about effort and technique.

“To me, it’s just having a lot of veteran players who understand the value of boxing out. When you get four guys boxing out and one guy going for the ball, you’re gonna get your share,” Kerr said. “We haven’t had some of the leaks in terms of our weakside shell, just letting guys run in there and just get a free run at the hoop. We haven’t had many of those on tape because we’ve got veteran guys who are locked in and they’re taking care of their man, boxing out every time.”

A stop is no good if you don’t get the rebound, and Golden State’s ability to finish possessions has contributed to their excellent defense to start the season. Getting stops and securing boards also leads to transition, where the Warriors have some of the most lethal weapons in all of basketball.

They understand more than anyone how defense creates offense, and that’s part of the reason why they maintain such effort on the less glamorous side of the ball.

“Their ability to execute offensively and shoot a high percentage allows their defense to be really solid because teams are playing against a set defense. But everything for the Warriors starts on the defensive end,” said New Orleans Pelicans head coach and former Warriors assistant Willie Green. “They have really good principles, guys that can play multiple positions, and once they get stops and they get out and run, they’re pretty dangerous.”

While the Warriors are off to a torrid start both in terms of record and metrics, the veteran leaders understand there’s still a lot of work to do. Iguodala recently characterized the team’s start as “OK,” and noted their favorable schedule to open the year. As of this writing, the Warriors’ seven wins had come against teams with a combined record of 22-32, and nine of Golden State’s first 12 games take place at Chase Center.

But still, there’s an undeniable vibe around this team that emanates comfort and promise, two things that haven’t been present for a couple of years. With Thompson and James Wiseman ramping up their activity in anticipation of a return to the lineup, combined with a few presumed NBA title favorites stumbling out of the gate, the Warriors certainly look like they could be a bona fide title contender when the postseason rolls around.

“We’ve got a chance to do something special,” Iguodala said. “Just trying to make the most out of every day and make sure that guys are locked in mentally with the grueling schedule and how it can — it’s like a trap. You know, 7-1 can be a trap. You just got to stay locked in.”

Don't Spend A Dime Without Reading This!

Thu Nov 11 , 2021
Kore 2.0 Watch Reviews  It’s okay to start with the basics. Smartwatches are smart devices just like the smartphones, but they are designed to be worn on the wrist. They support mobile applications and some have in-built biosensors for monitoring vital signs of the body. Having said that, it’s good to point out that smartwatches can be paired up with other […] 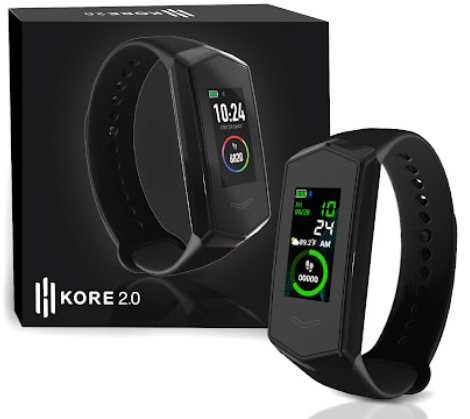