SAN FRANCISCO — If he sticks around much longer, the face of esports might actually have a wrinkle. Can a gray hair be too far behind?

Lee Sang-hyeok, better known as Faker, was dominant at 17, when he was on his way to becoming the first true global star of gaming. Now 26, he’s at the point where even the fiercest of League of Legends (LoL) athletes might consider something more appropriate for their age — maybe shuffleboard.

Faker is keenly aware of his advanced years, partly because the questions get old. His snappiest retort, as is the case with other high-mileage athletes over the years — say, Tom Brady — tends to come in the form of yet another triumph.

And here he is: Ol’ man Faker is back in the 2022 League of Legends World Championship finals, in pursuit of his fourth title.

And listen up, kids: He might be better than ever.

“I still have my same exact desire to win right now,” Faker said during a recent video call with The Athletic and an interpreter. “Obviously, I was very passionate when I started. But I feel like the passion back then derived from outside sources.

“Currently, it is derived from within myself.”


Faker remains the No. 1 attraction at tournaments, including the Worlds semifinals in Atlanta, where fans came out rooting for a familiar face. (Courtesy of Riot Games)

In advance of Saturday’s showdown pitting Faker’s team, T1, against DRX at a sold-out Chase Center in San Francisco, Faker said he was training smarter, playing more thoughtfully, getting his rest, paying attention to nutrition and “pretty much doing everything I can to keep my head clear.” The Seoul native is the mid laner for T1, and he enters play this weekend with titles already under his belt.

“I think adapting is probably the most important aspect (to longevity),” Faker said. “Because what may have worked in the past, the play style then, may not be working now. So, going through all the changes and constantly looking for ways to improve and making sure that I become a better player is probably the thing that I focus on most.”

On his march through this tournament, Faker extended his record of reaching at least the Worlds semifinals for the seventh time. His first came as a teenage sensation in 2013.

Before that, in the group stage this year, he became the first pro player to surpass 100 Worlds matches.

And before that, he was the only one with the nickname “Unkillable Demon King,” a record that might never be broken.

“He is absolutely the GOAT. He’s just a complete icon. He is our Michael Jordan,” Naz Aletaha, the global head of League of Legends Esports, said in a separate interview. “And I know a lot of fans are rooting for him.”

GREATEST. OF. ALL. TIME. Even as a rookie.

The story and stats behind @T1LoL‘s @faker League debut and beyond.

“The sport would be completely different without Faker,” said Josh “Jatt” Leesman, one of the top broadcast analysts in LoL esports and a commentator known as a shoutcaster in the sport. “He’s just been such a great ambassador for it. He’s had essentially no controversy in the nine years that he’s played, and he’s been the best — or near the best — player for all nine of those years.

“If you know one name in League of Legends, it’s almost always going to be Faker. He’s just, like, a really good conduit for getting people into the esports scene.”

To Faker’s delight, a lot of those loyal fans will be there in person this weekend. Tournament officials expect Chase Center — the home of the Golden State Warriors — to sell out 14,000 seats. For an example of how NBA Finals-eque things have gotten at these world championships, consider that Grammy winner Lil Nas X will perform at their opening ceremony on Saturday. Or, as the rapper’s press release put it, he will “create explosive musical moments, an ingenious League champion skin and a spectacular live Words performance.”

But there’s no mistaking the real star of the entire event.

Faker will be aiming to hoist the Summoner’s Cup for the first time since 2016. It’s been so long that the cup looks different this time, as the prize has been redesigned by Tiffany. But even Faker’s drought speaks to his greatness. The gap between titles is longer than most players’ entire careers. A win Saturday would make him the oldest player to ever win Worlds, a distinction currently held by Ambition, who was 25 when he won in 2017.

The showdown this time is almost cinematic in scope. Kim Hyeok-gyu, better known as Deft, attended Mapo High in South Korea — the same school as Faker — and plays for DRX. (Deft is also 26, so there will be a new “oldest” champion regardless.)

Faker vs. Deft final – Actual anime storyline that two schoolmates who loved the same video game 10 years ago are going to battle on the biggest stage.

Esports reality is better than any fictional scenario this #Worlds2022

It’s almost an ideal blend of drama for the first Worlds since the pandemic to allow crowds. Atlanta sold out both semifinal nights at State Farm Arena. Faker welcomes the raucous soundtrack. Two of his three previous career titles came in North America, and he digs the extra emotion.

“I think North American crowds definitely have a very loud voice, and they’re very rowdy when it comes to (cheering) for the game,” he said. “And I feel like it’s not them just cheering; it feels like they are actually participating. Being able to play in front of this big of a crowd is honestly a blessing, especially given that we are playing in front of a crowd who is more passionate. It’s been an enjoyable experience.”

Experience helps with the noise, too, and on that level, Faker has a thumb up on his competition. He has seen the sport evolve since its arrival in 2013 when he came on the scene. Riot Games announced that the 2021 finals between DWG Kia from South Korea and Edward Game from China drew an average minute audience of 30.6 million viewers. That was a 32.8 percent increase over 2020.

The 2021 Worlds final was broadcast in 18 languages by 19 broadcasters across 34 platforms, according to Riot Games.

Two sold-out nights this past weekend for @lolesports 🙌

Aletaha, who was named the global head of League of Legends Esports in 2021 following an eight-year stint as the head of global esports partnerships and business development at Riot Games, grew up in Southern California and attended her first basketball game at what was then Staples Center in Los Angeles. It’s also where she saw her first concert: U2. She said one of the favorite moments of her career came when she returned to that venue for the 2013 Worlds and saw the place packed with fans rabid enough to make even Bono jealous.

“I was just so excited and inspired by what I saw,” Aletaha said in a video call.

Just a few years before that, she said, “esports, as a whole, was so niche. I think there was very limited understanding of what it was and how to watch it. Part of our goal at Riot is we really invested into building out what is now this massive global sport. It was the 2011 Worlds final that was really the aha moment for us. We didn’t really invest in any production value at the time, but we streamed this final on Twitch and (to) about 2 million people.”

“Yeah, which at the time was mind-blowing, right?” Aletaha said. “At the time, (it) was like, ‘Whoa!’ We didn’t think that there was that much demand.”

The financial explosion had the side benefit of allowing players the viable option of a career in competing as a professional gamer. No more growing up and getting a job in real estate. Part of the reason Leesman, the former gamer turned shoutcaster, thinks some of the early stars’ careers didn’t last long is because it didn’t pay enough yet.

He dismissed the tropes about players in their 20s losing their reflexes or being outhustled by the latest wave of teenagers.

“Yeah, it’s kind of a myth,” Leesman said. “I think people thought it was reflexes, but I think it’s more to do with just time devotion. If you grew up when there was no money in esports, you had to stop playing as much. But now if you’re making money from it, you can just keep playing.” 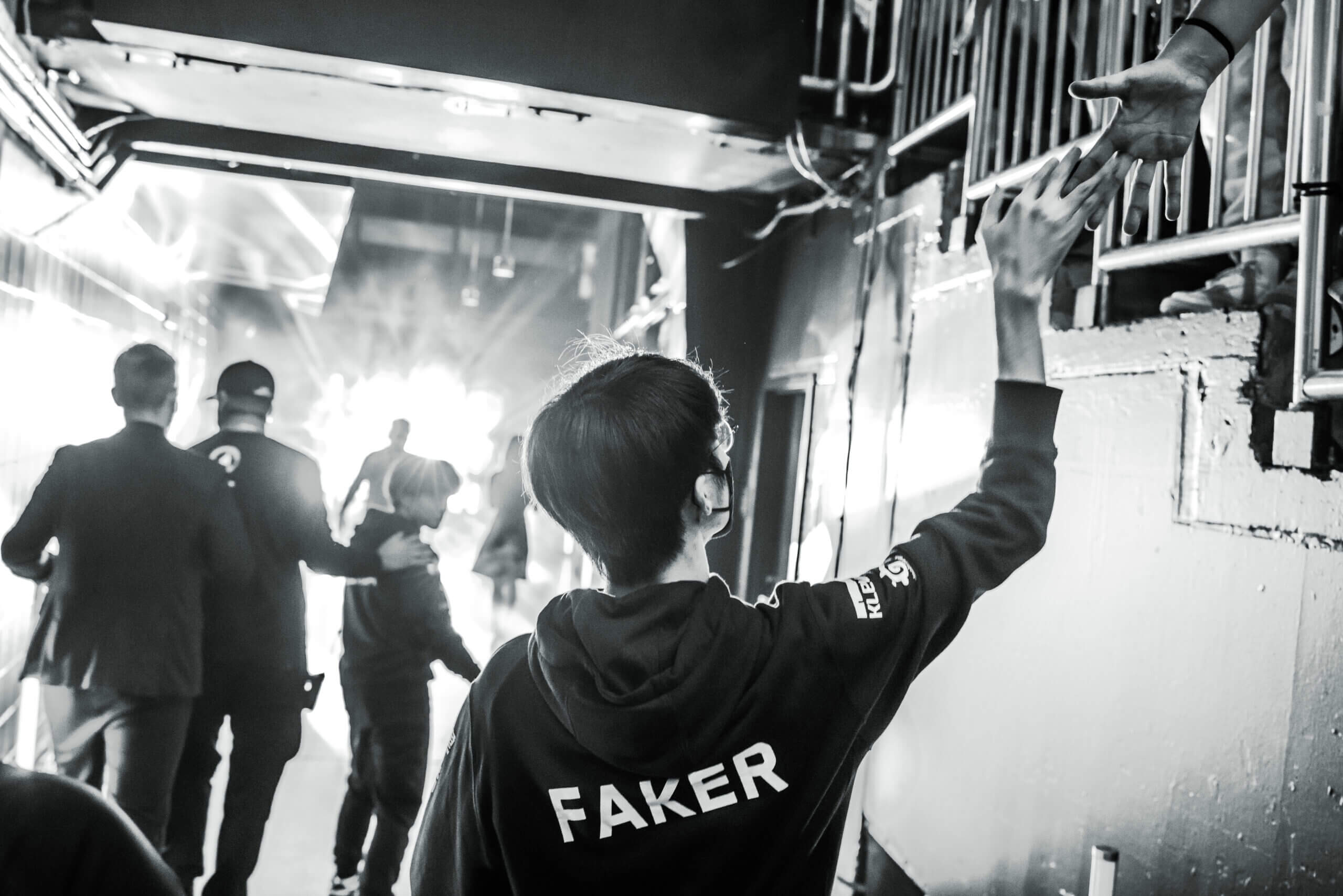 Faker is older than most players but said his training methods, as well as his inner fire, help him to keep evolving with the sport. (Courtesy of Riot Games)

Whatever the reason, the sport sure seems happy to have Faker around as he stands on the precipice of another world title.

“I think I have to do what I did back in 2016,” he said, referring to his most recent triumph. “I have to make sure that I take time and realize that every moment is precious.”

Mon Nov 21 , 2022
CBS Sports graphic We’re waiting for The Loss to come out of The Game. While the top four in the Power Rankings remain the same, they won’t be that way for long. Ohio State vs. Michigan looms over everything. One will fall in the 118th renewal of a rivalry that […] 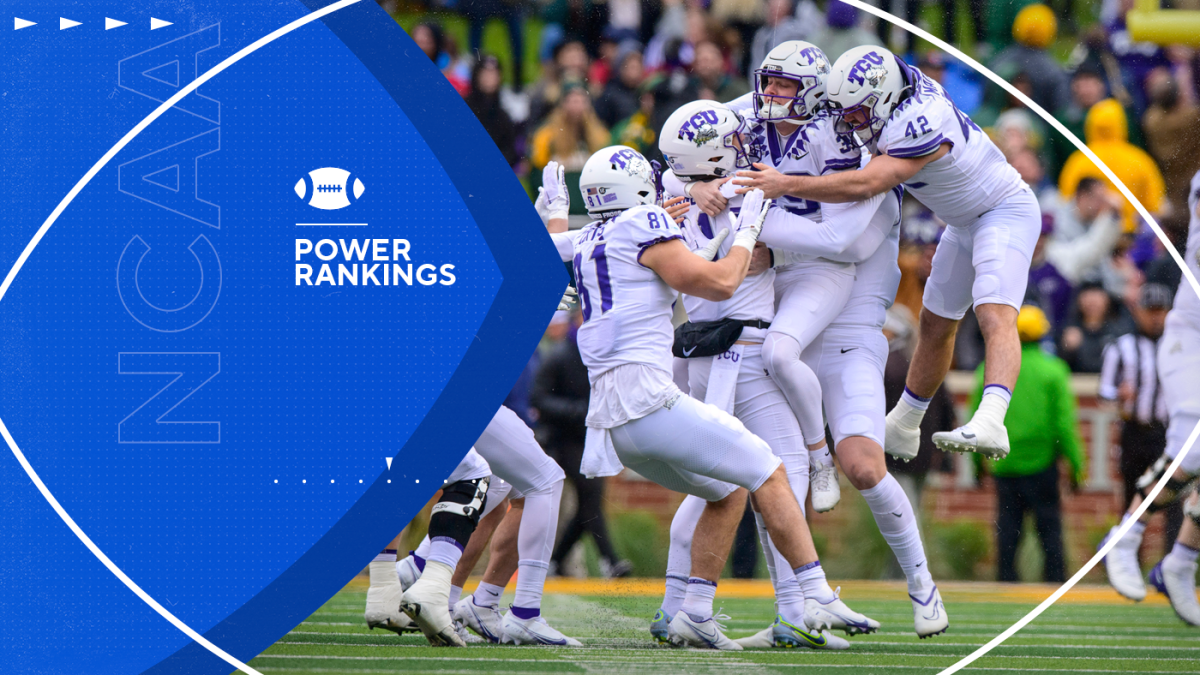