NFL teams are dealing with injuries even though they haven’t played a game this season. Our FanNation publishers provide the latest intel on injuries. While one of the best tight ends (George Kittle) in the league could be out this week, a top receiver (Michael Thomas) returns after being injured most of last season. Here’s a closer look at who’s in and who’s out as we kick off the 2022 season.

The Ravens had 52 of their 53 players on their active roster practicing at one point this week. The only absence was rookie defensive tackle Travis Jones, who is out with a knee injury. Despite the turnout, several players still might not be ready for the Jets. Left tackle Ronnie Stanley (ankle) is doubtful. If Stanley can’t start, Ja’Wuan James would play left tackle. Running back J.K. Dobbins (knee) and cornerback Marcus Peters (knee) are both questionable. — Todd Karpovich

Rookie wide receiver Velus Jones Jr. hasn’t been available since the second preseason game because of a hamstring injury and he’s listed as doubtful against the 49ers. Jones hasn’t practiced all week. The speedy third-round pick from Tennessee had a strong first preseason effort as a returner against Seattle but has since vanished. The Bears really need the receiver help now as they’re without N’Keal Harry until October and might need to use Ihmir Smith-Marsette in a limited role after he just was claimed on waivers from the Vikings. — Gene Chamberlain

BearDigest: Could be muddy mess at Soldier Field

Corner Greedy Williams has been ruled out with a hamstring injury against the Panthers. Rookie Martin Emerson and A.J. Green are the next guys up in the rotation. If the Browns want to keep Greg Newsome II in the slot, either could play the boundary in three-corner sets opposite Denzel Ward. — Pete Smith

Browns Digest: Matchups to watch vs. the Panthers

Center Frank Ragnow popped up on the injury report this week. He revealed he is battling a groin injury he suffered on Wednesday. He is listed as questionable against the Eagles. I am hearing he will test the injury on Saturday before a final decision is made on his availability. If you have D’Andre Swift on your fantasy team, consider this something to monitor Sunday morning before inserting the talented running back in your fantasy lineup. — John Maakaron

The Broncos have multiple starters listed as limited in practice. OLB Randy Gregory, OT Billy Turner and LB Jonas Griffith are still up in the air on whether they’ll start on Monday Night Football at Seattle. Keep an eye on LB Josey Jewell and WR KJ Hamler, both of whom have also been limited in practice. We won’t have an official Week 1 designation on any of these players until Saturday since Denver plays Monday night. Griffith was a full go in Thursday’s practice, though. — Chad Jensen

If the Packers are going to move the ball through the air, they’ll have to keep Za’Darius Smith and Danielle Hunter away from Aaron Rodgers. On Friday, left tackle David Bakhtiari did not practice and was listed as questionable by coach Matt LaFleur. Yosh Nijman played well in eight starts last season but he’s not Bakhtiari, the five-time All-Pro who suffered a torn ACL on Dec. 31, 2020, and is still struggling to get back into the lineup. — Bill Huber

All-Pro linebacker Shaquille Leonard has been ruled out for Sunday’s opener against the Texans. Leonard had a procedure on his back in June that also helped with calf and ankle issues, and he just recently returned to practice. He probably could play if it was absolutely necessary but the Colts want to give him a little more time to get fully into football shape. This will be the first time since early in 2018 that Leonard is fully healthy and pain-free. Don’t be surprised to see him debut in Week 2 against the Jaguars or in the home opener in Week 3 against the Chiefs. And Dennis Kelly has been out since the first week of training camp after a procedure on his knee. Beyond him, the Colts’ offensive line depth is very young and inexperienced. Head coach Frank Reich said Kelly is making good progress, so he’s yet to be ruled out. If he does play, he’ll likely be in the mix to come in if any of the starting offensive linemen outside of center goes down. — Jake Arthur

The Jaguars are entering Sunday almost perfectly for their road opener against the Commanders, a stark contrast from past seasons. Running back James Robinson will play without restrictions after returning from a 2021 Week 16 Achilles tear. He has practiced for weeks and head coach Doug Pederson said this week he thinks he is back at 100%, so he figures to play a role in the game plan. The only player on the injury report all week has been defensive lineman Foley Fatukasi, who has been limited with a calf injury. With Fatukasi still having a good chance to play since he hasn’t been ruled out of practices or workouts, the Jaguars are essentially at complete health. — John Shipley

Defensive end Frank Clark was the only active Chief to miss practice at any point this week before returning Friday. The most impactful absence is from tight end Blake Bell, who was placed on IR after 53-man roster cut-downs because of a hip injury suffered in the preseason. On Friday, head coach Andy Reid said “everybody should be good to go” against the Cardinals. — Joshua Brisco

It’s been just over five weeks since the Vikings’ top tight end, Irv Smith Jr., had thumb surgery, but he practiced in full and is absent from the team’s injury report. It’s possible Smith’s workload will be managed slightly against the Packers, but he’s going to be a big part of their offense this season. The Vikings are almost 100% healthy heading into the opener. — Will Ragatz

Inside The Vikings: Picking every game on the schedule

In Week 1, all eyes were on Michael Thomas’s hamstring. Fortunately, the 2019 Offensive Player of the Year will see action in the season opener. The Saints have two starters from last season who haven’t practiced the entire week, WR Tre’Quan Smith and CB Paulson Adebo. Losing Adebo is a huge hit, but the Saints secondary is deep, and I expect Bradley Roby will get the start against the Falcons. Special teams ace Dwayne Washington is nursing a hamstring injury, and backup OL Landon Young’s hip has been an issue. — Kyle T. Mosley

The Giants are holding out hope that they have their one-two pass rushing punch of Kayvon Thibodeaux (knee), their first-round pick this year, and Azeez Ojulari (leg), their sack leader last year, in the lineup. Although Giants head coach Brian Daboll has said both will be making the trip to Nashville and would be game-time decisions, it’s hard to envision either being ready considering both did very little work in practice this week. — Patricia Traina

Joe Flacco gets the start at quarterback in a revenge game against the Ravens, filling in for Zach Wilson, who injured his knee during the preseason. In fact, after Wilson’s subsequent knee surgery, his sophomore season won’t begin until at least Week 4. The Jets are also banged up on their offensive line. Veteran offensive tackle Duane Brown, who was signed to replace an injured Mekhi Becton, is out with a shoulder injury. Pressure is on for rookie Max Mitchell to fill in at right tackle as George Fant slides over to protect Flacco’s blind side. — Max Goodman

The Eagles’ approach to training camp of not tackling to the ground and not playing many starters in the preseason games seems to have paid off. Every player was a full participant in Friday’s practice and nobody is on the injury report. — Ed Kracz

Wide receiver Diontae Johnson (shoulder) and right tackle Chukwuma Okorafor (back) were the only two injuries the Steelers were dealing with heading into Week 1. Despite being limited throughout the week, Johnson said he’ll be ready to go against the Bengals on Sunday. As for Okorafor, he returned to practice on Friday after missing Thursday and also expects to be on the field and starting against the Bengals. — Noah Strackbein

All Steelers: What it means for Najee Harris to be a captain

George Kittle injured his groin on Monday and hasn’t appeared on the practice field all week. And, yet, the 49ers haven’t ruled him out for Sunday against the Bears, as he’s listed as questionable. Still, it’s hard to imagine Kittle playing if he’s less than 100% healthy because the 49ers probably can win without him, plus they can’t allow this injury to linger or get worse. — Grant Cohn

All 49ers: Three keys to victory

Four players have been ruled out against the Giants, among them second-year cornerback Elijah Molden (groin). Molden was the Titans’ primary slot cornerback as a rookie but missed a lot of time during training camp. The team traded for Ugo Amadi ahead of the preseason. Also, this year’s second-round pick, Roger McCreary, has shown he can rotate in as needed with 2021 first-round pick Caleb Farley on the outside. Also out are safety Lonnie Johnson Jr. (groin), inside linebacker Chance Campbell (knee) and offensive lineman Jamarco Jones (tricep). — David Boclair

All Titans: Amani Hooker gets extension

What Is The 75 Difficult Training? The Way of life Application, Discussed

Tue Sep 13 , 2022
If you’re looking to amount up your workouts, then possibly you have heard of the 75 Difficult application, a 75-day mental and physical problem designed to boost your self-discipline in addition to setting up energy and healthy patterns. The 75 Challenging exercise session was created in 2019 by Andy Frisilla, […] 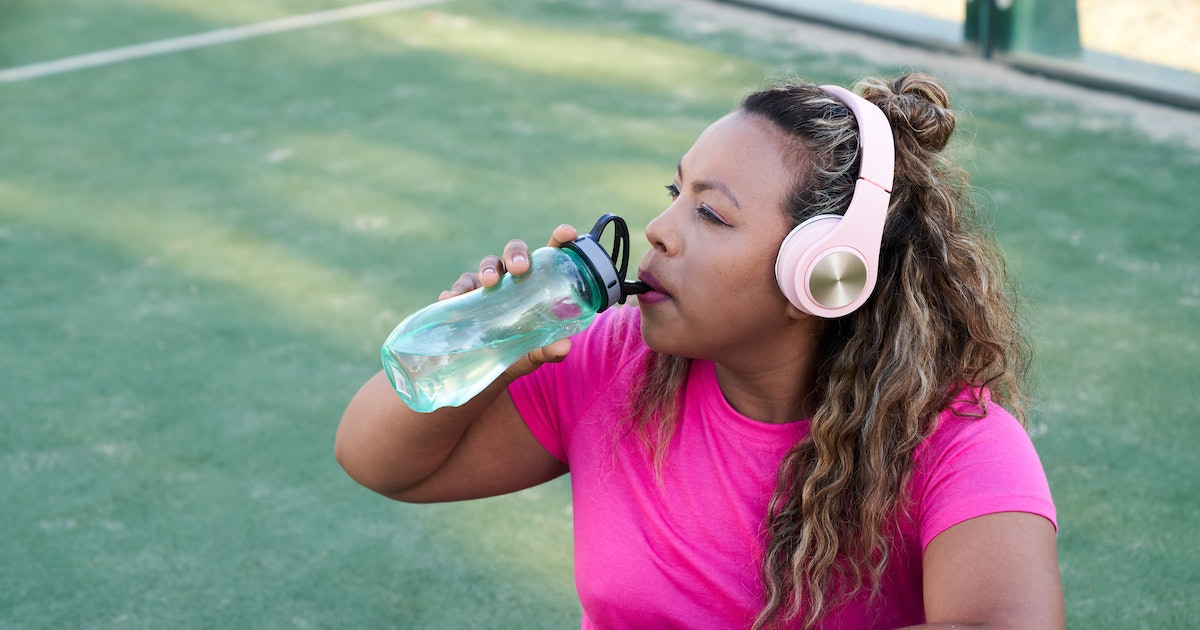